"Suzy, do you know anything about... witches?" 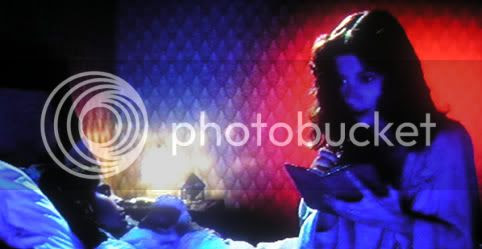 A favorite blog, Arbogast, is having a second go round of the achingly lovely The One You Might Have Saved blogathon. That character that if you were guiding the hand of fate, or of the screenwriter, you would have spared.

The first one to come to mind for me was Sara from Suspiria, played by Stefania Casini. We meet her and her immediate taking of Suzy (Jessica Harper) under her wing puts us in her corner. Her kindness, warmth, and curiosity would have marked her as a fine lead herself. But alas, she is the fatally too curious best friend of the final girl. The very things that make her so alive are the very things that doom her.

It's rare to see a healthy friendship among young girls in film which makes it especially sad to know it won't last. The two have a chemistry that oddly feels more at home in the impish innocence of The Trouble With Angels than Argento's black hearted fairy tale. In horror friendships tend to end in betrayal or cruelly cut down, Suspiria gives an extra twist of the blade by giving us both. Further, horror often speaks to our ache for companionship, for connection, and how that not being met or (sometimes literally) severed leaves far more traumatic scars.

At the film's end, as Suzy wanders from the burning mansion dazed and smiling (slipping into madness?) I can only wish she had Sara walking beside her. Two girls frightened, but having each other to lean on. Not even minding the rain and wondering what on earth they are going to tell the police when they walk to the end of the dark wood and out into the land of the living.
Posted by Jessica R. at 9:39 PM 4 comments:

Labels: Arbogast, Stefania Casini, Suspiria, The One You Might Have Saved
Newer Posts Home
Subscribe to: Posts (Atom)