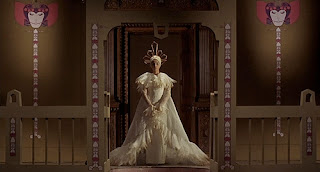 Having bats swoop above your head and dance around the tree tops is a pretty damn great way to start a viewing of monster movies, and so it was at the Riverside Drive-In this past weekend. Located in the lovely, lonely woods just outside of Pittsburgh it's two nights of monster and b flicks on the big screen. The event also allowed me to correct the shameful oversight of having never been to a Drive-In as well. The prints shown came from a generous collector and were gorgeous. In between films they played vintage trailers and marvelous conncession stand ads attempting to sell popcorn and soda as epic events in themselves.

The bill this year was represented by 8 films in total.

Black Sabbath, Italian horror maestro Mario Bava's anthology film. AIP's version of the film shuffles segments beginning and ending with two strong stories wrapped around a sumptuous looking but tepid middle. The first concerns a woman who learns the folly of robbing the dead, and the last is a marvelous variation on a vampire tale with a great performance by Boris Karloff, who also serves as the host of the bumpers between the stories. Here is where having a great print is felt most as Bava was a visual stylist first and the look of the film tells as much, or often more than the acting or oblique story line. Seen in this quality the film was a ravishing feast for the eyes in red, midnight blues, and that strange emerald green that's a Bava staple.

The Last Man on Earth, A loose adaptation of Richard Matheson's I Am Legend that has a great central performance by Vincent Price but basically feels like a dress rehearsal for the much superior Night of the Living Dead. Price carries the film and it has it's moments of genuine dread, but the rest of the cast is average, and there needed to be another actor as good for the ending to pack the punch it's trying for. Again the scenes of of the vampirized plague victims mindlessly shuffling and trying to break in to Price's house were an obvious influence on Romero, only he would take these images someplace truly apocalyptic.

Castle of Blood, Some pacing problems keep this from being a first rate gothic shocker. A gentlemen accepts a bet from Edgar Allen Poe himself to spend the night in a reportedly haunted mansion. He scoffs at such superstition but soon after arriving at the abandoned place is confronted by a lovely Barbara Steele begging him to take her away from this terrible place. It builds up some nice atmosphere and once it's revealed what's actually going on at the house it gets some full blooded scenes. But unfortunately it plays at time like the reels are out of order, and that it ran short so the producers had to pad it out to distribution length with a scene of a character picking up a candelabra and slowly walking to the other side of the house, looking around, and then slowly walking back and putting the candelabra down.

Island of the Doomed, Interesting as it's clearly resting on the fault line between old and new cinema horror. 10 years earlier and it's easy to see this as a tame, bloodless, black and white thriller about a group of trapped vacationers on a isle with some lethal plant life. But it's not just being in color that makes the difference, it's the amount of blood, the brazen misbehavior of the characters, and the sheer nastiness of the whole endeavor that announce a new phase is coming. I liked it because of its garishness frankly, even though it featured the most odious of the comic reliefs of the entire two nights.

The Abominable Dr. Phibes, My hands down favorite of the whole thing. Vincent Price plays a hideously scarred mad genius who uses the 10 biblical plagues as a template for seeking revenge on those he believes responsible for his wife's death. But no description can do justice to actually seeing the thing. From the licorice black tone of the whole thing as a very baffled Scotland Yard detective tries to figure out why some of London's finest physicians are ending up in predicaments like being impaled on gold unicorn statues to the otherworldly lovely Virginia North as Phibes' assistant. Who looks right smart in Art Deco by way of LSD get ups and steals scenes without saying a word. Highly recommended.

Dr. Phibes Rises Again, The rather thankless sequel to the utterly bonkers first suffers by comparison. Virginia North has taken a hike and her replacement fits the dark haired mysterious beauty part of bill but nothing else. Phibes really has no business in the story, and indeed pushes aside the much more interesting tale of Robert Quarry's doomed immortal looking desperately for the fabled River of Life. Still, it's impossible to work up too much antipathy to anything that ends with Vincent Price crooning "Somewhere Over the Rainbow" over the end credits.

Count Yorga, Vampire, AIP figured out how to do a vampire in a then contemporary setting right. Robert Quarry is terrific as the titular count, not a tiresome tragic anti hero but a smooth operating predator who you can believe has survived centuries by virtue of always having the upper hand. The scene where he amusingly examines a stake a would be Van Helsing has brought to fell him with is a particular highlight.

I, Monster, Amicus trots out a Jekyll and Hyde adaptation but curiously plays coy with the names, calling Sir Christopher Lee's Jekyll "Dr. Marlowe" in the film. A nice closer, a good solid adaptation, nothing too memorable, but then once you've seen Vincent Price furiously playing a neon pink and orange organ it's going to take a lot to leave an impression. Can't wait for next year. 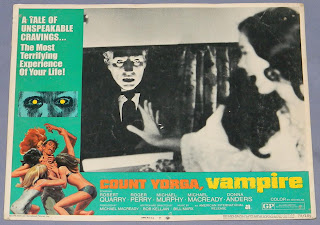