Waiting For the End of the World: On Trump, Jehovah's Witnesses and The Late Great Planet Earth (1979)

The woman had blonde hair. Her mouth was forever frozen into a scream of complete terror. I hated this illustration. But I kept turning back to the page to look at it. The book was from the seventies. She had been screaming for decades in vain. That scared me the most.

Armageddon as illustrated in Jehovah's Witnesses literature never shrank from the details. Great plumes or fire and smoke, the earth cracking open and swallowing tiny figures in the background. Leering faces of corrupt leaders and non Witness religious figures. And the beautiful, laughing, mocking Babylon the Great. Riding her seven headed beast and raising her cup to the spectacle.

I've been thinking of that illustration of Babylon the Great a lot lately. Every time the current election groans to a new deplorable low. In these strange days of a dangerous religious fundamentalist wanting to be the first rider of the apocalypse and a tacky bullshit artist who has a good many of god's born again children hoping that he's actually the herald of the end of days my thoughts keep going back to a 1979 "documentary" curio that's gained a terrible currency. 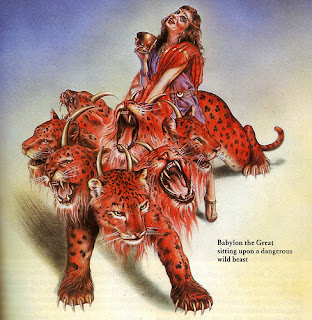 "The Late Great Planet Earth" was based on Hal Lindsay's smash bestseller of the same name. It was Biblical prophecy that ignored the prophetic tradition of warning misfortune if there was no justice for the poor and weakest to make hash out of Revelation with chunks of Daniel and Ezekiel thrown in. This concoction was then presented with a straight face as a "literal" reading of the last book of the Bible which was "clearly" about events in the 20th century that were soon to happen.

The film made of this somehow got Orson Welles to host and narrate it. And if he kept wondering why God had forsaken him to gigs like this he did an admirable job of not showing it on camera. His presence in fact becomes very irresponsible as he gives the whole thing an air of seriousness and import it in no way deserves. Save as a warning for how the religious right was set to deform our politics permanently.

What's not mentioned as a sign of the last days in "The Late, Great, Planet Earth" is as interesting as what is. The film makes nary a peep about abortion as that was still seen a frighteningly Papist thing to be concerned about. There is no mention of the road to Megiddo being paved in gooey cobblestones of wedding cakes baked for gay couples. And shockingly, when the film rounds up a rouges gallery of potential Antichrist candidates Ronald Reagan is included.

It's also enlightening to see how much of what was about to become the Moral Majority grew out of burnt out hippiedom. Disillusioned by protest movements, dabbling in Eastern religions, and mourning the genuinely alarming ecological devastation humanity had brought forth on its only home flower children were souring into neo cons looking for that portfolio that would be the key to the gated community away from the maddening crowd. Or more perniciously they were looking to underline their importance by being the last generation.

That belief is one I know all too well. And one that terrifies me as it colors my past and stains my future. Waiting, wanting, wishing for the world to end succeeds in killing the present, and the present moment is all any of us have. If you tell children they have no future they will believe you. So many kids I went to Kingdom Hall meetings with met with getting kicked out of "The Truth" via drugs, unplanned pregnancy or both. Being told, over and over and over, that we were no part of "The World" and juuuuust around the corner was that glorious future on paradise Earth where we could wander apple orchards while holding koalas (if the other sort of illustrations in the literature was anything to by) lead to a worldview helplessly disconnected from the present.

It's that's disconnect, and hunger for the center not holding that I see swirling in Trumpism and giving it hideous life force force. The selfishness, more explicitly the White selfishness, that will burn down the house we all live in rather than share it. That panic, fear and despair that the good life is slipping away and will not be coming back that leads to monstrous beliefs and actions. And yes, plenty of Serious People have calmly lectured that we've been here before and these people are not the majority and these movements always burn themselves out. But an angry minority can do a devastating amount of damage.

And "The Late Great Planet Earth" saw it coming, but not in the way it intended. In section of the film about potential Antichrists a talking head warns "If fascism ever comes to the United States it'll be called Americanism." It's impossible not to hear "Make America Great Again" in that. And it's impossible not to see a radicalized Christian fundamentalist base fed on decades of apocalyptic fantasies decide that if you want a Second Coming to happen you better jump start it yourself. And yet, I despair at the lethargy I see from the left. The insistence on utopia and moral purity that conveniently removes the person from the responsibility of any direct action or effort beyond hitting "retweet". We have the potential as a people to do so much, to repair, rebuild and prepare a better world for the future generation. But we chose not to.

So I'm starting to realize that Jehovah's Witnesses got it kinda right. But Armageddon didn't come in balls of fire and bowls of judgment. It came in smartphone aps and apathy and smart water and curdling sense of the common good. It came in Baby Boomers voting over and over to dismantle the social safety net. It came in Whites viewing their racial hold starting to fray and panicking. Babylon the Great came riding an Uber and getting drunk on cold brew coffee and craft beer. Her lips slick with the blood of "I'm not racist but...". As in all things, the supernatural was not needed. Humans proved capable of building an Apocalypse just fine on their own.