Great directors’ late works tend to get met with a mixture of extreme defensiveness or a queasy, we don’t like to talk about that avoiding the subject. For all that a late or last work will have a cheering section, there are those that are met with “well it doesn’t tarnish what came before.” And few last films from a major director have met a chillier reception and reputation than Alfred Hitchcock’s Family Plot. This is a shame to say the least, because it’s one of his warmest, funniest films. And shows that one of Hollywood’s most venerable directors could adapt as adroitly as he had before during his decades long career.

Family Plot’s story concerns Barbara Harris as daffy phony psychic. Bruce Dern is her quarrelsome lover and partner in crime. They hook a big fish in a wealthy woman ensconced in a Tudor style mansion belonging to a Columbo villain of the week and overflowing with bric a brac. The woman wants the pair to track down a missing heir to the family fortune. On the way home Harris and Dern argue over what to do next and nearly run over a blonde wigged Karen Black, dressed like a killer from a Gialli. She’s on her way to make a ransom pickup. She is one half  of a much more malevolent crooked couple. Her partner is William Devane playing a magnificently oily creep who wears a smile like a threat. As is the way in mystery stories these two seemingly disconnected threads will soon become dangerously entangled. 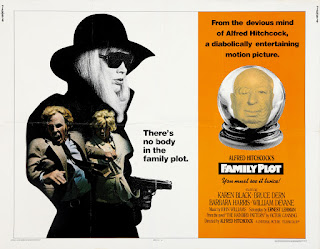 One of the biggest complaints leveled at Hitchcock’s curtain call was that it looked and played more like a TV movie than a feature from The Master of Suspense. Forgetting that Hitchcock had already done terrific work on TV, helming some of the best episodes of his own series, Alfred Hitchcock Presents. As well as forgetting that  the seventies were the harvest golden age of the TV movie format. Family plot is rich in details like the grubby knick knacks cluttering Harris’ shabby home. And full of interesting shots such as a crane shot of two characters playing cat and mouse through the overgrown, labyrinthine paths of a cemetery. It’s best to view Family Plot as a great chef preparing comfort food. It might just be mashed potatoes and meatloaf but it’s likely to be some of the best mashed potatoes and meatloaf you’ve ever had.

It’s also a pleasure watching Hitchcock working with a New Hollywood cast like Harris, Dern, and Black and getting rewarded with terrific performances from all involved. Harris and Dern have a magnificent, bickering chemistry. They clearly adore driving each other crazy. Black is excellent as a Femme Fatale learning her limits when the game turns to murder. And Devane is great as a sociopath all the more unnerving for be able to pass for a respectable businessman. It’s one of the most seventies thing about the picture. Everyone is a crook and working an angle. The question becomes do you take from those who can afford to lose. And Hitchcock’s sympathies lie with Dern and Harris. They’re con artists but they’re working class con artists, cooking hamburgers and having to break dates because the boss insists they have to cover a shift. 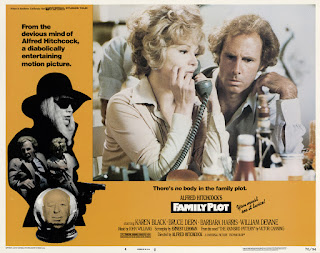 Hitchcock is also helped greatly by Ernest Lethem’s sparkling, witty script. And John Williams turns in one of his most off model scores. It’s a mix of TV movie sounds from the period, lots of horns and harpsichord, mixed with a wah-wah pedal funk track and Williams’ trademark strings and angelic choruses. Rather than reveal that Hitchcock had lost his powers Family Plot is a solid, well made mystery. The kind Hitchcock began his career with. And there are few better images to close a career on than Harris’ delicious wink to the camera. A sweet acknowledgment that movies are one of the biggest, longest con games running. And that they are irresistible fun, for audiences and directors alike.