“Day of the Dead is okay” seems to be the inevitable thing to say about Romero’s third zombie film. Its reputation as an also ran, a minor player to the major league hitters of the first two has not improved much in the ensuing years. It was hamstrung by a budget that ended up much smaller than what Romero intended for the story. And it’s a bitter, bleak film, with very little of the black humor of Dawn of Dead or the quiet tragedy of Night of the Living Dead to leaven it. It’s targets seem both too small and too large, “people are awful” not a particularly new, or radical statement. But what felt weirdly apolitical in 1985 feels a great deal different in 2016 and what came after.

In the baked Florida heat a helicopter pilot John (Terry Alexander) surveys the ruin that was Miami. While back at an underground military base Sarah (Lori Cardille) is troubled by bad dreams. She’s nominally working with a group of military men on a solution to the zombie outbreak. But the officer in charge, Rhodes (Joseph Pilato), acts more like he’s looking forward to they day when he can finally stop pretending to listen to her and just start sexuality assaulting her. 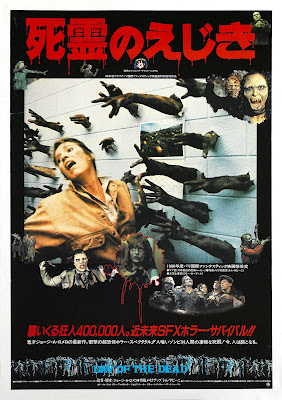 That resentment of women is literally killing us is what gives the film teeth. Sarah’s ideas and orders are constantly overridden by the other men. Often leading to devastating consequences. The apocalypse that feels strangely small on the outside, heightens the chamber piece going on inside the base. They are some of the last humans left on Earth and they act as beastial as the groaning horde clawing at the perimeter fence trying to get in. The zombies are muted in their threat, you know what they’ll do and you know if you can stay out of their reach you’ll be safe. There are no such guarantees with the humans you’re trapped with.

The zombies have become in the third film the inevitability of death. They are dangerous but the real test is in how we carry ourselves in the face of certain destruction. And in Day of the Dead and in real life people failed that test of character spectacularly. Things only fall apart in the film when paranoia and resentment take control of most of the human cast’s abilities to reason and live with another. That is why Day’s reputation deserves to come out of the shadow of the first two Dead films. It’s the Romero film for the cracking up of 2016 and the long march of Trump’s first year in office. The characters mad rush to kill each other before the zombies do eerily prefigures Americans turning on each other rather than deal with existential threats like climate change.


Romero’s zombie films do not offer solutions. They usually do not even offer an ending of finding a place of relative safety for their characters. So it’s interesting that the closest Romero gets to a Hollywood ending of Sarah and John escaping to an island feels like a last sip of whiskey as the plane barrels toward the earth. There will be no zombie cure. There will be no recovery of civilization. There will only be two people telling each other stories by a fire as the world ends. And that lands especially heavy now. As even Romero couldn’t foresee us ensuring all our islands will be underwater.
Posted by Jessica R. at 1:09 PM