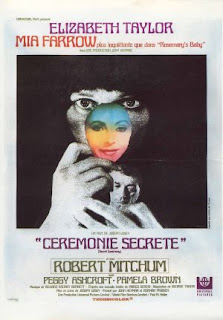 Director Joseph Losey should be better known today than he is, but he was entering a period of critical and audience rediscovery when he helmed two notorious Elizabeth Taylor vehicles. One, Boom!, is virtually unwatchable, the other is a delightfully baroque psychodrama just waiting for cult rediscovery. Taylor and Mia Farrow play two damaged people who unwisely enter a relationship of mutual desperation and delusion and it quickly spirals out of control. Hypnotically strange and unfortunately hard to find, look for it to sometimes turn up on TCM.
Posted by Jessica R. at 11:03 PM