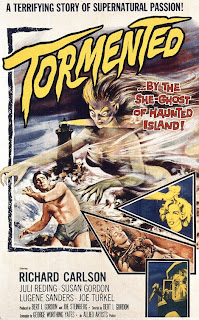 Director Burt I. Gordon is better known for his fits of giant mayhem a la Amazing Colossal Man, but this is a very interesting if flawed one off. A musician who is about to marry into wealth has an unwelcome visit from a former flame end with her taking an unintended but very beneficial spill off a lighthouse onto the rocks below. Thinking the problem solved he tries to turn his attention to his new life only to start noticing ghostly footprints in the sand and other signs the dead aren't so at rest. The lead gives an unusually shaded performance for a Gordon flick, but the primitive effects do keep this from being a minor gem in the Lewton tradition as there is no doubt that this is a supernatural event and not the antihero's guilty conscience coming home to roost. Still, for something off the path in fifties black and white monster movie tradition it's worth a look.
Posted by Jessica R. at 7:49 PM

I watched this one right before my own marriage, which was on Long Island, so also seaside, and it was the perfect combination of halfway decent "revenge from beyond the grave" and Bert I. Gordon goofy for the occasion. I especially enjoyed seeing Richard Carlson play a not-so-good guy for once.