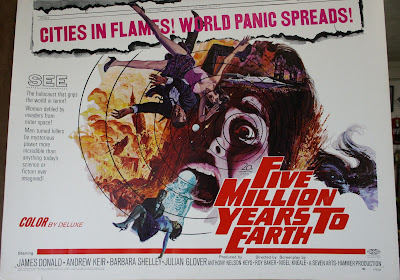 Splendid sci-fi from Hammer films. Digging out a new subway stop uncovers something that shouldn't be there, an alien ship, and more precisely an alien ship that has been buried there for millions of years. Professor Quatermass is there to investigate and he soon uncovers a very ancient and very horrifying secret about human origins, and that the ship and it's occupants are not resting so soundly anymore. All of it building to a enervating apocalyptic finale. The marvelous Barbara Shelley is on hand as the professor's assistant. In short, Prometheus done much better, much smarter, and for much less coin some forty plus years ago.
Posted by Jessica R. at 4:19 PM