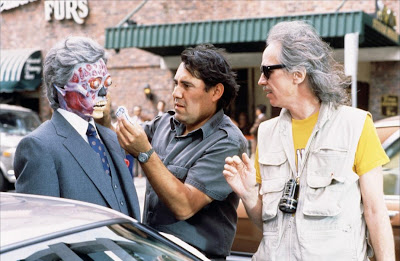 "It hasn't dated at all," is itself a phrase as stale and meaningless now as a squashed half loaf of bread forgotten behind the microwave. But damn, this savage throat punch of the Reagan decade really hasn't dated at all. (Watch the alien/human fundraiser scene and see if you don't impose Romney's 47% video remarks over it.) A wickedly funny tale of aliens slowly siphoning off Earth's resources and keeping the public cowed with subliminal messages ordering them to do such things as "OBEY" and "MARRY AND REPRODUCE" is kept from preachiness by some great, spiky performances by Keith David and Rowdy Roddy Piper.  Chew some bubblegum and get your ass over to this movie.
Posted by Jessica R. at 1:56 PM